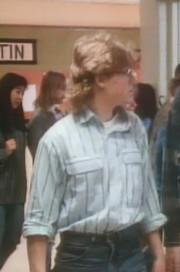 Here are some shots of Wheels just being classic Wheels. You may also recall that in this episode he refuses to drink because his parents were killed by a drunk. I admire that. I know it didn’t last though. But that’s okay too. I mean, it would have been, if it didn’t get out of hand. Anyway. I also need to say that, you know how the cops found the Zits drinking underage and were just like “run along now”? Where I grew up, you’d be handcuffed and formally arrested and taken to the station. I get so pissed when I see cops break up these parties on Degrassi like “oh you silly kids, put the drinks away.”