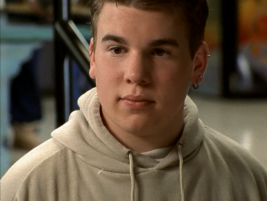 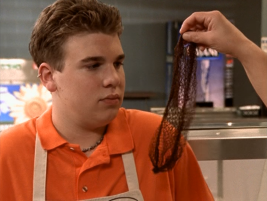 Okay so first, Spinner is in this distressed tee that almost reminds me of the Affliction trend that came later. Then, I mean, we really just have to talk about this famous hoodie. I gave it a tag, “The Ratty Hoodie”, so that I can track how often Spinner wears it. That’s part of the joke later, that Spinner “wears that hoodie too much”. I like that little plot point because I definitely got made fun of at that age for the same thing (which is weird, right? I mean, you buy clothes to wear them over and over, right?). I also like that plot point because once again, it reflects real life, that people are outfit repeaters, which doesn’t get represented on TV enough. Personally I like to make fun of this hoodie in my head, (lovingly of course), and pretend that it’s like, withered and worn and tattered, probably has some holes in it, and probably smells kind of musty. I also like to pretend it used to be white. Maybe it came from a yard sale or he found it in a trash bin on the side of the road. Anyway, so this greige, somewhat thin hoodie with super cool dragons on the front will return, so stay tuned. And lastly, Spinner has to work in the caf so he gets to don a uniform and look just like Sheila, in an orange polo, a white hairnet, and a weird wilty hairnet that doesn’t even have its elastic anymore.